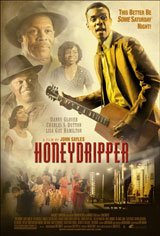 It's 1950 and it's a make or break weekend for Tyrone Purvis (Danny Glover), the proprietor of the Honeydripper Lounge. Deep in debt, Tyrone is desperate to bring back the crowds that used to come to his place. He decides to lay off his long-time blues singer Bertha Mae, and announces that he's hired a famous guitar player, Guitar Sam, for a one night only gig in order to save the club.

Into town drifts Sonny Blake, a young man with nothing to his name but big dreams and the guitar case in his hand. Rejected by Tyrone when he applies to play at the Honeydripper, he is intercepted by the corrupt local Sheriff, arrested for vagrancy and rented out as an unpaid cotton picker to the highest bidder. But when Tyrone's ace-in-the-hole fails to materialize at the train station, his desperation leads him back to Sonny and the strange, wire-dangling object in his guitar case. The Honeydripper lounge is all set to play its part in rock n' roll history.