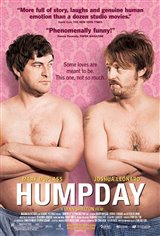 It's been a decade since Ben (Mark Duplass) and Andrew (Joshua Leonard) were the bad boys of their college campus. Ben has settled down and found a job, wife, and home. Andrew took the alternate route as a vagabond artist, skipping the globe from Chiapas to Cambodia. When Andrew shows up unannounced on Ben's doorstep, they easily fall back into their old dynamic of macho one-upmanship.