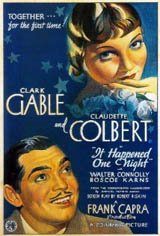 Spoiled heiress Ellen Andrews (Claudette Colbert) wants to marry fortune-hunting aviator King Westley (Jameson Thomas), despite her father's (Walter Connolly) objections. To keep Ellie from marrying, her father holds her prisoner on his yacht. Ellie escapes by diving from the yacht and swimming to shore, where she hops on a Greyhound bus for New York.

On board she meets recently fired newspaper reporter Peter Warne (Clark Gable). Peter recognizes her and Ellie, who has lost her purse, makes a deal with him: if he helps her get to New York, she'll let him have the exclusive on her story. Thrown together by circumstances, the gruff newspaperman and the spoiled rich girl go through a series of misadventures, and eventually realize they have feelings for each other.

Performances are only available at select theatres only. Repeat showings are on April 20, 2014 and April 23, 2014.