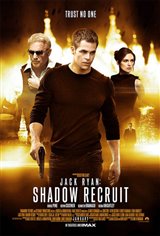 While working in the CIA’s covert intelligence office as a junior analyst, Jack Ryan (Chris Pine) accidentally uncovers evidence of an oncoming terrorist attack. With no one to verify if the attack is legitimate, Jack is sent to Russia as a field agent to investigate.

While in Moscow, he meets Viktor Cherevin (Kenneth Branagh), the brains behind a plot to break down the world’s economy. While Jack learns what it really takes to be a field agent as well as trying to mend his broken marriage, he realizes it may be too late to stop Viktor from starting a catastrophic breakdown of the global economy.