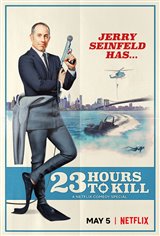 Iconic comedian Jerry Seinfeld makes a splash as he drops in by helicopter to take the stage at the Beacon Theatre in New York City for his first special of all-new material in 21 years.

He talks of his marriage of 19 years and how being a husband is very different from being a boyfriend. He discusses how arduous it is to get tickets and go to a show like his with people you can probably barely stand, and reveals why when you say something sucked, it's basically the same thing as saying it's great.