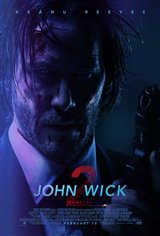 In a follow up to 2014's John Wick, this film brings back Keanu Reeves in the title role as the former hit man pulled out of retirement. The story tracks John's life since the first film and explores the identity crisis he finds himself in: is he John, the family man who's mourning the death of his wife, or John Wick, the ruthless international assassin?

When a former associate hatches a plan to seize control of a shadowy international assassins’ guild, John realizes his hit man days are far from over. He makes the trip to Rome to demolish the plot, and an epic battle ensues between him and some of the globe’s deadliest killers.