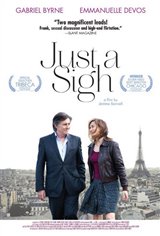 During a break between performances in Calais, stage actress Alix takes a train to Paris, in order to do an audition. On the train she meets Douglas (Gabriel Byrne), an attractive, older Englishman. When they arrive at the Gare du Nord, he tries to start a conversation with Alix by asking her for directions, but another passenger responds. Later that day after her audition, Alix finds herself by chance at a church where Douglas is attending a funeral for a woman he loved. Alix joins him, without being invited, in his hotel room.