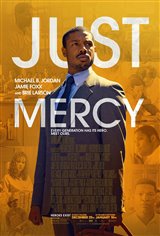 In the late 1980s, Civil Rights defense attorney Bryan Stevenson (Michael B. Jordan) takes on the case of Walter McMillian (Jamie Foxx), who is on death row for killing a young white woman in Monroeville, Alabama.

The evidence pointed to McMillian's innocence, as dozens of eyewitnesses were with him at a church fish fry when the young woman was killed. However, the authorities, eager to find a suspect, decided McMillian was their man and fabricated evidence and testimony against him.

When an almost entirely white jury returned a verdict of guilty, sentencing him to life in prison, the judge overruled the jury's recommendation and imposed the death penalty. That got Bryan Stevenson's attention and after looking into the case, he decides to take it on.