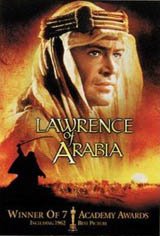 A young intelligence officer in 1916 Cairo, Thomas Edward Lawrence (Peter O'Toole) is given leave to investigate the progress of the Arab revolt against the Turks in World War I.

He organizes a guerrilla army and leads the Arabs in desert raids and attacks against the Turks. Eventually, he leads his army north in an effort to destroy the power of the Ottoman Empire.

Years later, he seeks anonymity as a soldier under a new name.