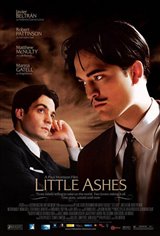 Madrid in 1922 is a city wavering on the edge of change as traditional values are challenged by the dangerous new influences of jazz, Freud and the avant-garde. Salvador Dalí (Robert Pattinson) arrives at university at the age of 18, determined to become a great artist. His bizarre blend of shyness and rampant exhibitionism attracts the attention of two of the university's social elite—Federico García Lorca and Luis Buñuel.

Salvador is absorbed into their decadent group and for a time he, Luis and Federico become a formidable trio, the most ultra-modern group in Madrid. However, as time passes, Salvador feels an increasingly strong pull toward the charismatic Federico—who is oblivious to the attention he is getting from his beautiful writer friend, Magdalena. Finally, in the face of his friends' preoccupations—and Federico's growing renown as a poet—Luis sets off for Paris in search of his own artistic success.

Alone in Madrid, Federico struggles against his psyche, tortured by the damning implications of his own religious beliefs and the undeniable voice of his flesh. He is haunted by news of Salvador, who is collaborating on a Surrealist film with Luis and has embarked on an affair with Gala, a married woman.

By 1936 Spain is teetering on the precipice of civil war, and Federico, now a highly acclaimed and controversial playwright, receives an invitation to dinner from Salvador and Gala. But the hosts have a rather unusual agenda and the evening is a disaster. A week later, Salvador is hosting a party when he discovers that Federico has been assassinated in the outbreak of war. The walls of self-denial that surround the artist come crashing down as he realizes, too late, the depth of his love for Federico.