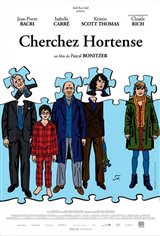 Damien, a professor of Chinese culture who helps French business executives prepare to work in China, lives with his partner, Iva, a stage director, and their adolescent son Noé. Iva orders him to ask his pompous father Sébastien, a high-ranking judge, to help her brother’s Serbian friend get a visa extension before she’s deported. Damien tries, but his father is too busy and doesn’t give him enough time to explain the case.

Meanwhile, Damien finds out Iva is having an affair with one of the young actors in the play she’s currently working on and throws her out. He learns that the young Serb he was supposed to help is actually Aurore, a waitress who has a crush on him.