Louis Cyr: The Strongest Man in the World 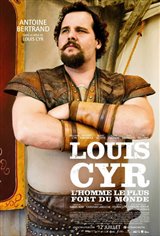 4 votes and 4 Reviews | Write a Review

Lowell, Massachussets, late 19th century. Louis Cyr, a French-Canadian laborer working in a textile factory, is convinced by an Irish promoter to leave his family in order to demonstrate his immense physical strength at fairs across the country. His girlfriend, Mélina Comtois, also comes along on the trip that lasts six months and ends when the promoter takes off with all the money. Rolling up his sleeves, Cyr continues to travel as a strong man with Mélina, whom he has married, and ends up in Montreal, where he meets Horace Barré, a strong man who becomes his most faithful ally, and Gustave Lambert, an agent who helps to revive his career on the Montreal scene. Louis becomes an overnight sensation. Encouraged by his success, Louis only has one goal: to win the title of the strongest man in the world.