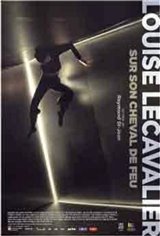 Since her debut in 1981 with La La La Human Steps, Louise Lecavalier has been pushing the limits of her body, in performances that have found her touring the globe. At age 58, the Quebec dancer and choreographer confides to the camera the origins of her passion, evokes the founding principles of her creations and her quest for perfect movement, then discusses her relationship with Édouard Lock, founding director of La La La Human Steps. Excerpts of the pieces "So Blue" and "Thousand Battles" complete the testimonials of her partners, her friends and her two daughters.