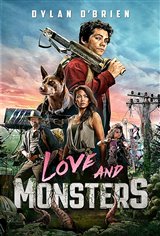 When it became clear that a comet was about to hit Earth seven years earlier, missiles were sent up to destroy it, but the irradiated fragments that dropped down caused all the reptiles, insects and amphibians to mutate, turning them into monsters that eat humans. While Joel (Dylan O’Brien), who was 17 at the time, was out with his girlfriend Aimee (Jessica Henwick), his parents were killed by the monsters.

Now 24, he's spent the past seven years in an underground bunker with other survivors. His habit of freezing when he's afraid has left him with duties that keep him in the bunker while the other in his colony go out on missions to get food and supplies. Desperate to reconnect with Aimee, he believes he's discovered her colony on the radio and sets out on an 85-mile journey to find her. Along the way, he meets other survivors, including expert hunter Clyde (Michael Rooker) and his young sidekick Minnow (Ariana Greenblatt), who teach him how to survive.