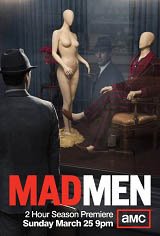 Don and Megan are now married, and their marital relationship seems to have a negative effect on their work performance. Don’s incompetency at work is rivaled by newcomer Michael, who has a hidden backstory but brilliant work ethic. Peggy leaves the agency in search of something bigger, and she makes an important decision in her relationship with her boyfriend. Roger and Pete battle for a higher seat in the company, and both men’s relationships at home take a turn for the worse.

Joan, now a single mom, struggles as her husband serves overseas, and she’s forced to make a moral choice at work that could benefit everyone involved. After a series of disastrous events, Lane ends up making a huge decision in his life. Megan’s acting aspirations come in between her closest relationships, and Don struggles to make her happy. We see Don end where he started – drinking at a bar and surrounded by women.