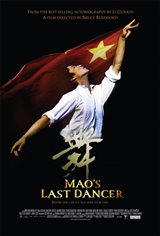 Born in 1961, Li lived with his six brothers and impoverished parents in China's Shandong Province. His family was destined to be laborers, but when recruiters from Madame Mao's ballet academy in Beijing swept through his single-room school in search of untapped talent to mould into the future leading lights of the Cultural Revolution, eleven-year-old Li was selected, and committed to a strange new life of stringent training, both artistic and ideological. At first, the experience overwhelmed, but when an audacious teacher introduced him to the works of great international performers (via concealed videotapes, no less), Li (Chi Cao) realized dance's true revolutionary potential.

Practising by candlelight and jumping up stairs with sandbags tied to his ankles to build his strength while his peers slept, Li became the school's top dancer. Discovered by Ben Stevenson (Bruce Greenwood), the artistic director of the Houston Ballet and part of the first American cultural delegation to Communist China, Li in turn was one of the first exchange students allowed by Mao's regime to go to America. After a brief bout with culture shock—Houston's malls and so-called Chinese restaurants were alien spheres to him—he quickly fell in love with America's freedom and one of its winsome daughters. When his exchange ended, Li refused to return to China, leading to a dramatic standoff at the consulate that made headlines across the United States. Based on the autobiography by Li Cunxin.