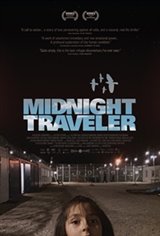 In 2015, after Hassan Fazili's documentary Peace in Afghanistan aired on Afghan national television, the Taliban assassinated the film's main subject and put a price on Fazili's head. Fearing for their survival, the Fazili family fled Kabul for Tajikistan.

Yet after 14 months spent submitting asylum applications that were rejected again and again, they were deported back to Afghanistan. It was at this juncture that Fazili picked up his cell phone and hit the record button.

Chronicling every step from inside the action, Fazili, his filmmaker wife, and their young daughters trek across Iran, Turkey, Bulgaria, and Serbia scurrying through perilous landscapes, huddling in freezing forests, cramming into rattling vehicles.

As they endure smugglers, gangs, and refugee camps, the camera witnesses not only the danger and desperation but also the exuberance and tenderness of this irresistible, loving family. For Fazili, framing their story becomes an assertion of control, humanity, and self-expression in a situation where none exists.

With its radical subjectivity, visceral footage, and poetic form, Midnight Traveler is a migration story like no other.