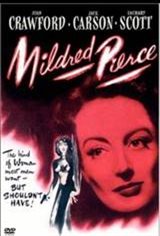 Joan Crawford won an Academy Award for her bravura portrayal of the titular heroine in Mildred Pierce. The original James M. Cain novel concerned a tawdry waitress who slept her way to financial security so as to provide a rosy future for her beloved daughter, only to be rewarded by having her true love stolen away by that same daughter.

Both the police and the audience are led to believe that the murderer is chain-restaurant entrepreneur Mildred Pierce (Crawford), who takes the time to relate some of her sordid history. As the flashback begins, we see Mildred unhappily married to philandering Bert Pierce (Bruce Bennett).

With the help of slimy real estate agent Wally Fay (Jack Carson), she eventually buys her own establishment, which grows into a chain of restaurants throughout Southern California. Meanwhile, Mildred smothers Veda in affection and creature comforts.

She goes so far as to enter into a loveless marriage with the wealthy Monty Beragon in order to improve her social standing; Beragon repays the favor by living the life of a layabout playboy, much to Mildred's dismay -- and possible financial ruin.