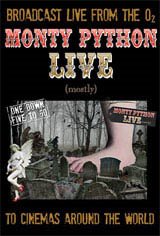 The five remaining Pythons will perform live on stage together for the first time since performing at the Hollywood Bowl on September 15, 1980 and 40 years after they last appeared on stage together in the UK. The hugely anticipated live show be broadcast live from the O2 to cinemas around the world on July 20, 2014. Encores on July 23 and 31.