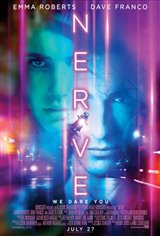 Vee (Emma Roberts) learns about a website called Nerve, in which watchers pay to watch (and comment on the players) and players get a series of increasingly dangerous dares that earn them an increasing amount of money. She feels the website is sketchy, but her friends encourage her to play, because they feel she never takes any risks.

Reluctantly, Vee joins and her first dare isn't that bad - she gets a $100 dare to kiss a stranger for five seconds. She goes with a male friend to a restaurant, who randomly picks a guy who's reading a book. She does it and the guy, Ian (Dave Franco), turns out to be a Nerve player too. They both get a $200 dare that says they should go to the city together.

Vee discovers she's having more fun than she thought she would, so when she's dared to try on an expensive dress for $500, she doesn't hesitate. Things get strange when her wallet and clothing are taken from the dressing room and she gets a $2,500 dare to leave the store immediately. She discovers people have died doing the dares, which include lying between train tracks as a train passes overhead. However, she also finds out that if she stops playing, all the money she earned will be forfeited. She continues, even when the game involves guns, but will she go as far as murder?

Based on the young adult novel by Jeanne Ryan.