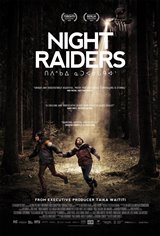 In a dystopian future, Niska (Elle-Maija Tailfeathers) and her daughter Waseese (Brooklyn Letexier-Hart) are on the run from a government group tracking them down. When they enter a dilapidated city they encounter another man, who is relieved to see another "free" child.

However, Waseese is taken by government forces and placed in "the camp" to be indoctrinated and turned into a soldier. Desperate to get her back, Niska enlists the help of those fighting back against the government leading to a climactic battle between the opposing groups.