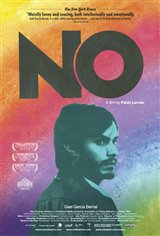 During the 1988 referendum in Chile, Augusto Pinochet calls for a vote. Those running against him hire young advertising executive René Saavedra to lead their campaign. Under a watchful eye, the men hatch brilliantly upbeat advertising campaign called "No" in order to win the election and free the people from the current leader's cruelty.