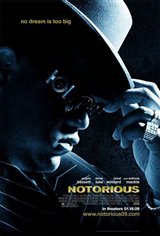 Following the life of rapper Christopher Wallace a.k.a. The Notorious B.I.G. In just a few short years, The Notorious B.I.G. rose from the streets of Brooklyn to become one of the most influential hip hop artists of all time. B.I.G. was a gifted storyteller; his narratives about violent life on the streets were told with a gritty, objective realism that won him enormous respect and credibility. His stories were universal and gave a voice to his generation.