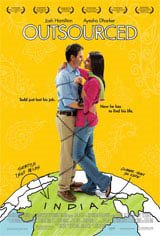 Todd Anderson (Josh Hamilton) spends his days managing a customer call center in Seattle until his job, along with those of the entire office, are outsourced to India. Adding insult to injury, Todd must travel to India to train his new replacement. As he navigates through the chaos of Bombay and an office paralyzed by constant cultural misunderstandings, Todd yearns to return to the comforts of home.

But it is through his team of quirky yet likable Indian call center workers, including his friendly and motivated replacement, Puro (Asif Basra), and the charming, opinionated Asha (Ayesha Dharker), that Todd realizes that he too has a lot to learn—not only about India and America, but about himself. He soon discovers that being outsourced may be the best thing that ever happened to him.