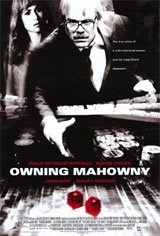 Dan Mahowny (Hoffman) is an assistant bank manager with a head for numbers, a knack for making decisions, and a devastating appetite for gambling. Using $10.2 million of siphoned bank funds, Mahowny gambles for the thrill of the bet. By day, he works obsessively in the bank; by night, he gambles obsessively on sports, ponies and at the gaming tables. His girlfriend, Belinda (Driver), a clerk at the same branch, has to struggle to reconcile their romance. Indulged by the management of the bank which flatters itself for having found its own wunderkind, nurtured by the Atlantic City casino manager who sees the banker as a meal ticket to Vegas, Mahowny finds himself in a gambler’s paradox -- playing with increasing odds in order to win back the limitless funds which are his to take as long as he doesn’t get caught. Based on the non-fiction book by Gary Ross Stung: The Incredible Obsession of Brian Molony -- about the largest one-man bank fraud in Canadian history.