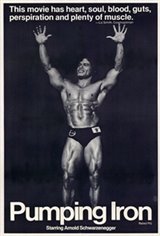 Arnold Schwarzenegger gained his first real notoriety outside body-building circles with this documentary about a group of men training for the Mr. Olympia contest.

Arnold had already won the title six times before, and was training for his seventh victory before retiring to fully pursue his acting career (which began to catch fire with his likable turn in Stay Hungry, released the same year) when this was shot.

Here he displays an easy charm and wicked sense of humor as he plays mind games with his competitors and explains how getting pumped up for competition always reminded him of sex (which might explain why he seems so cheerful). And what is Arnold smoking in his dressing room after the contest?

Future Incredible Hulk Lou Ferrigno is also on hand, and his fierce determination as he goes through a brutal weight lifting regimen shouting Arnold! Arnold! speaks both to his own desire to win and how strong a presence Schwarzenegger was in body-building at the time.

You don't have to be a body building fan to enjoy Pumping Iron, though Arnold is the one contestant who shows obvious star quality.