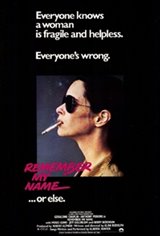 This disquieting domestic thriller from writer and director Alan Rudolph was produced by his long-time mentor Robert Altman. Anthony Perkins stars as Neil Curry, a construction worker living happily in suburbia with his wife Barbara (Berry Berenson) until their home becomes vandalized during the holiday season by a stalker.

It seems that the assailant, Emily (Geraldine Chaplin), is Neil's chain-smoking, mentally disturbed ex-wife, who has just been released from jail after serving a long sentence for murder. Now she seems to be both seeking revenge for some past wrongs and attempting to win Neil back at the same time.

Meanwhile, the television broadcasts the mounting death toll from a devastating earthquake in Hungary, increasing the sense of menace, though no one seems to take much notice.

In supporting roles, Remember My Name (1978) featured early motion picture performances from a trio of actors that would go on to become well-known, Jeff Goldblum, Alfre Woodard and Dennis Franz.