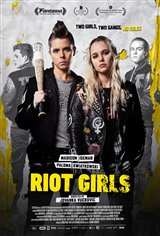 Four years after a mysterious disease wipes out all the adults in the city of Potter's Bluff, the orphaned kids have split into two battling gangs — the poor kids live on the East Side of the bridge and the wealthy kids live on the West Side.

Scratch (Paloma Kwiatkowski) and Nat (Madison Iseman) are part of the East Side. When their leader, Nat's brother Jack (Alexandre Bourgeois), is captured by the rival group, runaway West Sider Sony (Ajay Friese) offers to help get him back.

Filmed in Parry Sound, Hamilton and Toronto. Director Jovanka Vuckovic is Toronto based and most of the cast members are Canadian. Funded by Telefilm Canada, Ontario Creates, Northern Ontario Heritage Fund Corporation and the Harold Greenburg Fund.