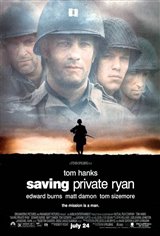 World War II was a pivotal event of the 20th century and a defining moment for America and the world. It shifted the borders of the globe. It forever changed those who lived through it, and shaped generations to come. It has been called "the last great war."

Nothing could have prepared the soldiers at Omaha Beach for the battle they are about to wage. Filled with hope and resolve, none of them knows if they will survive the small strip of beach ahead of them. As his eyes scan the Normandy coast, Captain John Miller (Tom Hanks) believes that getting himself and his men past the gauntlet is the greatest challenge he has faced in the war. But his most difficult task still lies ahead.

Even as the Allied forces begin to get a foothold at Omaha, Miller is ordered to take his squad behind enemy lines on a dangerous mission to find and retrieve one man: Private James Ryan (Matt Damon). The youngest of four brothers, Ryan is the last survivor, the other three having all been killed in action within days of one another. As the squad pushes deeper into enemy territory, Captain Miller's men find themselves questioning their orders. Why is one man worth risking eight... why is the life of this private worth more than their own?

Amid the chaos and terror of those days in early June 1944, this remarkable story searches to find decency in the sheer madness of war.