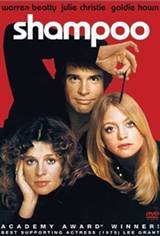 A frankly adult comedy about the sex lives of the aimless and the rich, Shampoo is also a pointed commentary on the demise of 1960s idealism at the dawn of the Nixon era.

It is Election Day, 1968, and randy Beverly Hills hairdresser George Roundy (Warren Beatty) is too worried about attending to all of his women's tonsorial and sexual needs, while trying to swing a bank loan to fund his own salon, to notice the fateful Presidential race.

As George juggles the demands of girlfriend Jill (Goldie Hawn) and mistress Felicia (Lee Grant), not to mention Felicia's daughter (Carrie Fisher), he meets Felicia's husband Lester (Jack Warden) to get money for the salon and discovers that his beloved ex-girlfriend Jackie (Julie Christie) is now Lester's mistress.

As Nixon's victory speech drones in the background the following day and Paul Simon's mournful '60s music plays on the soundtrack, George's free-wheeling world collapses around him for reasons that he can barely begin to comprehend.

Produced and co-written (with Chinatown scribe Robert Towne) by its star Warren Beatty, Shampoo became Beatty's second critical and popular success as a producer after Bonnie and Clyde, and it bolstered Hal Ashby's track record as director.

Shampoo earned Grant an Oscar for Best Supporting Actress, as well as a Supporting Actor nomination for Warden and Beatty's first nomination as writer. With Nixon's 1974 Watergate disgrace adding an extra edge to the humor for 1975 audiences, this tragic bedroom farce became one of the highest-grossing films in Columbia Pictures' history at the time.