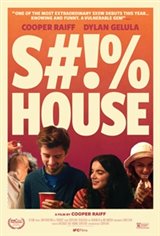 Alex Malmquist (Cooper Raiff) is a shy college freshman whose shares a dorm room with Sam (Logan Miller), a slacker who's only interested in getting drunk. Lonely after just a few weeks at college in Los Angeles, Alex considers transferring to a school closer to his home in Dallas, because he misses his his mother (Amy Landecker) and sister (Olivia Welch).

Alex forces himself to go out one night to attend a party at the campus party house known as "Shithouse." There, he bumps into his dorm floor's resident advisor, sophomore Maggie (Dylan Gelula), who begins flirting with him. They enjoy a magical night together, during which Alex gets to know her a little better. The evening ends in bed, but in the morning, Maggie can't get rid of him fast enough. Alex, who thought their liaison was the beginning of a relationship, struggles to understand what happened.