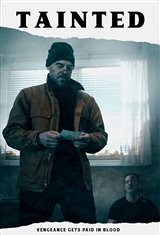 Finnish ex-con Lance (Alan Van Sprang), an ex-Mafia cleaner with ties to the Aryan brotherhood, has just been released after 15 years in prison. He hopes to escape his violent past and attempts to live a quiet life.

That all changes when he is offered an olive branch from the Russian mob who put him in prison, giving him a final assignment to earn his freedom. The plan goes awry as a young boy witnesses the whole attack and Lance finds his choices ultimately impact everyone who crosses his path.