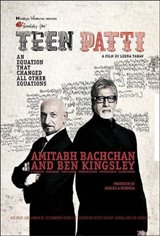 Perci Trachtenberg (Ben Kingsley), widely regarded as the world's greatest living mathematician, meets Venkat (Amitabh Bachchan), a reclusive math genius from India, at a high rolling casino in London. Venkat tells Perci about an equation that could not only change the dialogue on mathematics forever, but one that has already left an indelible impression of guilt—for many painful reasons—on Venkat's life. As it turns out, the reclusive genius Venkat has cracked a theory that could redefine the principles of probability and randomness. However, as with all exceptional knowledge, his equation has its upside—as well as its dark underbelly. Aware that he is on the precipice of an extraordinary discovery, one that could find applications across various sciences, Venkat is encouraged to test his theory in the real world by professor Shantanu, an ambitious colleague of Venkat. Although Venkat has no interest in the money that could come from practicing his equation to crack Teen Patti, (a poker game) he eventually succumbs to Shantanu's charismatic persuasion. Soon, with the help of a few students, each with a complicated and singular fate of their own, they explore the addas (underground gambling dens) of wild Bombay. But what starts out as an experiment between a charismatic young professor and an eccentric older one soon descends into a game neither of them can control. When their lives sink into maddening chaos, the greed and desperation that had fueled them on can no longer save them. Perci understands that Venkat's theory in essence, questions the idea of what is random—and what is fated.