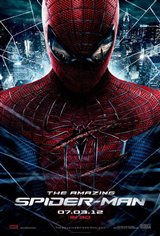 When his parents leave young Peter Parker to stay with his Uncle Ben and Aunt May, little does he realize he'll never see them again. As he grows older, despite being a social outcast at high school, Peter (Andrew Garfield) develops a crush on his beautiful classmate, Gwen Stacy (Emma Stone), with whom he shares a love of science.

Peter discovers a briefcase that belonged to his father, which inspires him to find out more about his parents and why they left him. His investigation leads him to Dr. Curt Connors, his father's former partner, whose villainous alter-ego is The Lizard. When Peter is accidentally bitten by a radioactive spider in a lab, he discovers he has super human abilities and decides to put them to good use.