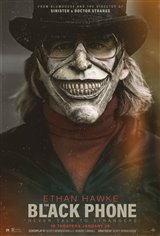 In a suburban Colorado town in the 1970s, five children go missing, kidnapped by a sadistic killer known as "The Grabber." Finney Shaw (Mason Thames), a 13-year-old boy is walking home from school when he runs into a "part-time magician" (Ethan Hawke) who says he needs a helping hand. After letting his guard down, Finney later finds himself in a soundproof basement, and quickly learns that the man he met was not a magician, but The Grabber himself.

On the outside, Finney's sister Gwen (Madeleine McGraw) worries about her brother, as she begins to have vivid dreams connected to her brother's abduction, learning details regarding The Grabber that police have never disclosed.

When a disconnected phone on the basement wall begins to ring, Finney discovers he can hear the voices of the killer’s previous victims. Finney tries to escape with their help, while his sister does her best to help the authorities on her own initiative locate the house where Finney is being held captive.