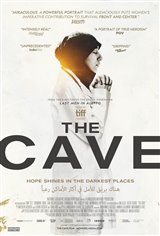 Deep beneath the surface in the Syrian province of Ghouta, an underground field hospital known as The Cave has been set up in a series of tunnels and underground rooms, after all the above-ground hospitals in the town were destroyed by attacks. Pediatrician Dr. Amani manages the hospital as well as treating the constant stream of wounded children who are brought to her, covered in blood from missile attacks.

Dr. Amani faces sexism from male clients, who berate her for the lack of medicine, despite the fact that no one, not even male doctors, can get medicine through the war zone, which has been surrounded by military forces. Her own father tells her during a phone call she'll never get the professional respect she deserves, no matter how many children she saves.

When Dr. Amani manages to make it out of The Cave to go on a house call to a mother with four malnourished children, she learns that the woman can't earn money to feed them because men won’t let her get a job.

Despite the horrifying conditions, Dr. Amani and her colleagues — a male doctor named Dr. Salim and a female nurse called Samaher — struggle to remain upbeat as they restore hope for some of the thousands of children and civilian victims of the ruthless Syrian civil war.