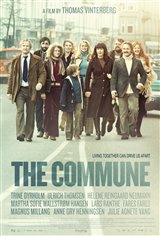 Because the house is so large, Anna decides it would be interesting to try forming a commune to live in the house with them and their 14-year-old daughter, Freja. She talks Erik into trying it out and they invite a variety of their friends and professional acquaintances. House rules include having regular meetings in which each member tells the group how they're doing. Decisions are settled with a vote from all the members. Group dinners, high level academic discussions and plenty of booze are combined with skinny dips, which leads to sexual tensions. However, when Anna has a crisis in her relationship with Erik, she begins to feel that communal living may have been a mistake.