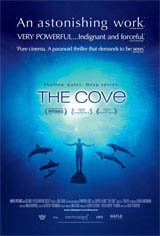 In the 1960s, Richard O'Barry was the world's leading authority on dolphin training, working on the set of the popular television program Flipper. Day in and day out, O'Barry kept the dolphins working and television audiences smiling. But one day, that all came to a tragic end.

The Cove, directed by Louie Psihoyos, tells the amazing true story of how Psihoyos, O'Barry and an elite team of activists, filmmakers and freedivers embarked on a covert mission to penetrate a hidden cove in Japan, shining light on a dark and deadly secret. The mysteries they uncovered were only the tip of the iceberg.