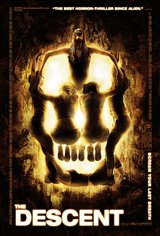 One year after a tragic accident, six girlfriends meet in a remote part of the Appalachians for their annual caving trip. Deep below the surface of the earth, disaster strikes when a rock falls and blocks their route back to the surface. The girls soon learn that Juno, the thrill-seeking leader of the expedition, has brought them to an unexplored cave and that as a result no knows where they are to come rescue them. The group splinters and each push on, praying for another exit. But there is something else lurking under the earth -- a race of monstrous humanoid creatures that are adapted perfectly to life in the dark.

As the friends realize they are now prey, they are forced to unleash their most primal instincts in an all-out war against an unspeakable horror -- one that attacks without warning, again and again and again.