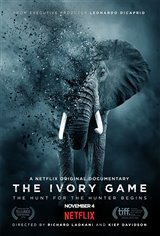 This striking Netflix documentary brings some startling statistics to the screen: One elephant is killed every 15 minutes; in the last five years, 150,000 elephants have been slaughtered for the sole purpose of obtaining their ivory; and if the senseless, merciless murder of African elephants continues, they will be extinct in 15 years.

Directed by Kief Davidson and Richard Ladkani, and produced by Leonardo DiCaprio, The Ivory Game tracks the atrocity of elephant poaching across eight countries and in a brutally honest fashion, depicts the animals as a species under severe duress. It presents the issue as critical and in dire need of resolution, but rather than leave the audience eviscerated in a state of hopelessness, it inspires action. The documentary tells a tale that the world needs to hear, and helps ignite a spark that will ideally end the ivory game.