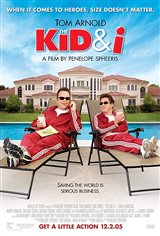 Bill Williams (Tom Arnold), a down-and-out actor, is unexpectedly hired to write a sequel to the action film that made him famous more than a decade ago. When Bill learns that his co-star is Aaron Roman (Eric Gores), a rich kid with no acting experience, what appeared to be the chance for a major comeback turns into a series of outlandish complications.

As the duo embark on a journey of outrageous misadventures, the unlikely pair discover that it takes more courage to face real life challenges than it does fighting bad guys on the big screen. Although Aaron may be inexperienced in acting, his tenacious spirit, unwavering optimism and unconditional friendship turns out to be an important, enduring gift to Bill.