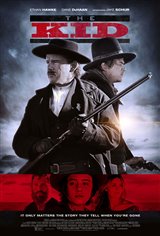 In a failed attempt to stop his alcoholic father from beating his mother to death, Rio Cutler (Jake Schur), 14, shoots his father dead. The teen goes on the run with his older sister Sara (Leila George), but hot on their trail is their vicious Uncle Grant (Chris Pratt), who wants revenge for his murdered brother.

The teens head for Santa Fe, where they hope to find a friend of their mother's, and they wind up sharing a hideout with Billy the Kid (Dane DeHaan) and his gang. Billy takes them in and bonds with Rio, but their friendship is interrupted when a posse arrives. Several of Billy's men are killed and Billy is captured by Sheriff Pat Garrett (Ethan Hawke), who agrees to take Rio and Sara to Santa Fe. Rio is afraid at first to tell Garrett what he's done, but when Grant shows up on the scene, Rio has to make a decision.