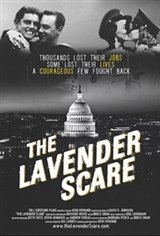 With the United States gripped in the panic of the 1950s Cold War, President Dwight D. Eisenhower deemed homosexuals to be "security risks" and vowed to rid the federal government of all employees discovered to be gay or lesbian.

Over the next four decades,the longest witch-hunt in American history, tens of thousands of government workers would lose their jobs for no reason other than their sexual orientation.

But the mass firings have an unintended effect: they stirred outrage in the gay community, helped ignite the gay rights movement, and thrust an unlikely hero into the forefront of the LGBTQ fight for equality.Partly based on the award-winning book by historian David K. Johnson, THE LAVENDER SCARE illuminates a little-known chapter of American history, and serves as a timely reminder of the value of vigilance and social action when civil liberties are under attack.