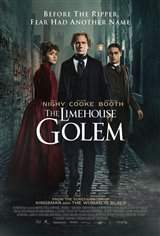 During 19th century London, the city is shaken after a series of murders in the Limehouse district. The press claims that the monstrous crimes could only be committed by The Golem – a legendary creature from dark times.

With no leads, Scotland Yard assigns the seemingly inexperienced Detective Kildare (Bill Nighy) to investigate the slaughters, which have been dubbed the Limehouse Golem murders. Kildare reasons that there has to be some logic involved in the killer's reasoning, even though the murders seem random. The Golem killed a prostitute one week, but unlike Jack the Ripper, he went on to kill an entire household the following week.

The killer leaves a message at a crime scene that reads, "He who observes spills no more less blood than he who inflicts the blow." Kildare realizes the message is for the police. When music hall performer "Little Lizzie" (Olivia Cooke) is  accused of poisoning her playwright husband John Cree (Sam Reid), Kildare discovers a link between the two cases.