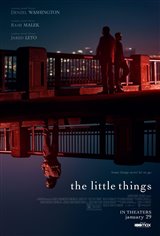 Deke Deacon (Denzel Washington), a burned-out deputy sheriff from Kern County, California is sent to Los Angeles to team up with L.A. Sheriff's Department Sergeant Jim Baxter (Rami Malek) in an effort to track down a serial killer.

As the count climbs to four murders, the detectives become even more determined to find the killer. Deacon has theories that lead him to arrest a suspect (Jared Leto), but when the man is able to provide an alibi, he's set free. Baxter, who wonders why Deacon hasn't had a promotion in 15 years, is unaware that the investigation is dredging up echoes of the older policeman's past, uncovering disturbing secrets that could threaten more than the case.