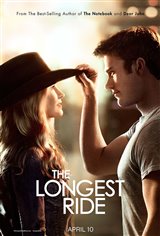 Luke (Scott Eastwood) was a champion bull rider, but after a fall that put him in the hospital, he had to stop competing. Now, with the possibility that he and his mother could lose their ranch, he has to get back into the sport to earn enough money to pay the bills, even though another bad fall will likely kill him.

He meets Sophia (Britt Robertson), a college student who will soon be heading to New York to begin her new career. They fall in love, but with them both heading in opposite directions, they don't know where their relationship stands. While driving, they come across Ira (Alan Alda), an elderly man whose car went off the side of the road, trapping him inside.

He shares his memories of his own decades-long romance with his beloved wife, which deeply inspires the young couple.