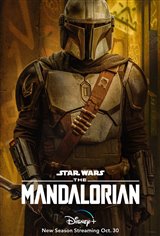 Taking place roughly five years after Return of the Jedi and before the emergence of the First Order, another warrior emerges in the Star Wars universe. The Battle of Jakku has been won by the New Republic, Galactic Concordance has been signed, and there is finally peace in the galaxy after decades of war.

The Mandalorian (Pedro Pascal) is a lone gunfighter in the outer reaches of the galaxy far from the authority of the New Republic.

In Season 2, The Mandalorian and the Child continue their journey, facing enemies and rallying allies as they make their way through a dangerous galaxy in the tumultuous era after the collapse of the Galactic Empire.