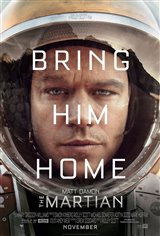 During a fierce dust storm on the planet Mars, NASA astronaut Mark Watney (Matt Damon) is impaled by an antenna, which destroys his suit's bio-monitor computer. His crewmates presume he's dead and flee the planet, leaving him behind.

Mark's injuries turn out to be relatively minor, but he must now try to survive, with few supplies, on his own. He uses his skills as a botanist in order to grow food and make water, while trying to figure out how to get a signal to Earth in order to let someone - anyone - know he's still alive.

Based on the book by Andy Weir.