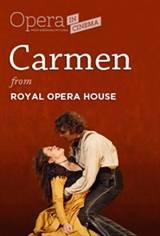 One of the most popular operas of all time, Carmen "is about sex, violence, and racism—and its corollary: freedom," says Olivier Award-winning director Richard Eyre about his new production of Bizet's drama. "It is one of the inalienably great works of art. It's sexy, in every sense. And I think it should be shocking." Elina Garanca sings the seductive gypsy of the title for the first time at the Met, opposite Roberto Alagna as the obsessed Don José.