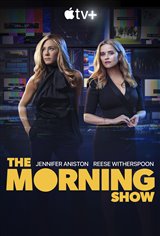 Alex Levy (Jennifer Aniston), the co-host of the popular TV series The Morning Show, wakes up to bad news one morning. Her co-anchor and friend of 15 years, Mitch Kessler (Steve Carell), has been accused of sexual misconduct and fired.

Meanwhile, small-time Southern field reporter Bradley Jackson (Reese Witherspoon) is at a coal mine protest when a protestor knocks her cameraman to the ground. Her subsequent rant goes viral, gaining millions of views in less than 24 hours. She's asked to be a guest on The Morning Show the next day.

Her appearance gets network executive Cory Ellison's (Billy Crudup) attention. With the ratings for The Morning Show already sinking, Cory decides to implement big changes. Fearing that her job is on the line, Alex makes a surprise announcement.

In the second season, a death could change everything for the people who work at The Morning Show.